Find out how to WTM do Brasil can help your company to Regularize the Data of yours Declarations in DIRF this year.

Amended Siscoserv Law: Government will share data on Exchange and Other Ancillary Obligations

Change in the Siscoserv Law: What changes with the deactivation of the System and Data Sharing by the Government? Understand how and why to declare in DIRF and ECF the transactions of Services abroad?

When many of us thought that Siscoserv would no longer be talked about, provisional measure 1040/2021 came in, changing the law that gave rise to the system!

But in practice, what changes in other ancillary obligations and in the exchange rate with the termination and the Siscoserv law? What does it mean when it says that the government will share the data with SECEX? How to understand exactly what is happening and assess its impact on business transactions?

No, Siscoserv is not coming back. It is off and will remain so.

What about data on service operations abroad? They still exist, but now they have even greater attention..

Companies will not have to get credit card data, exchange, international shipping, B/L, etc. and type on a new specific system or on a system such as Siscoserv.

THE Provisional Measure 1040/2021  published on 03/29/2021 deals, among other matters, with the amendment of article 25 of Law 12,546/2011, and made official data sharing by government bodies, except RFB, with Secex on services paid or received from abroad and extinguishes the taxpayer's obligation to inform service operations.

Siscoserv was deactivated in July 2020, but the law that determined the obligation had not yet been changed. This caused some insecurity in the companies, as they were obliged to declare, but had no place to make this declaration.

The government understands that the data that companies previously declared in the Siscoserv “are already presented” in the exchange and in other ancillary obligations. Now, it has only made official the data sharing of other obligations that companies present to replace the previous declaration.

It will not be necessary for the taxpayer to declare in Siscoserv or another system. Now, government agencies and secretariats will pass on this information regarding the acquisition and sale of services abroad to the SECINT of the Ministry of Economy.

What's the problem: If companies pay everything only by exchange and declare everything they pay/receive in DCTF, DIRF, ECF, etc.. NONE problem! Nonetheless, if there are services from abroad paid via credit card, via agents in Brazil (or other means) and, mainly, if these services ARE NOT DECLARED in these obligations? there we have a problem of default!

We know that 9 out of 10 importers are in default on these obligations for committing some common mistakes such as not detailing international expenses on the credit card or the payment of international freight made, nor expenses with forwarding agents, cargo agents, shipping agents in Brazil.

What are the consequences: Sharing data between government agencies will make possible failures of companies very transparent. The Siscoserv penalties were never applied in scale, but for these older obligations the fines are already consolidated.

What to do: Understand exactly what is happening and assess the impact on your company!

The ME (Ministry of Economy), informed in Note , when the shutdown of Siscoserv in July 2020, that the capture of data for the purpose of statistics and inspection, will be made from data that are currently presented by companies to the government in:

During the term of Siscoserv, penalties could be severe (although they were never applied on a large scale), now we are dealing with much more robust and old obligations. These have an even more solid legal framework and possible sanctions are already applied.

The government has turned off a system, but there will be no harm to inspection and statistics because they will look for the data in other obligations where this data “is already presented”.

However, most companies still have doubts about how to present and we can demonstrate this with a quick survey on the consistency of this information, using public data:

It is possible to check in statistics site from the Ministry of Economy the available data on the last “complete” year of Siscoserv (since 2020 was interrupted in July).

There, it is possible to extract raw or summarized data that identify the volume of information declared by NBS Chapter, number of reporting companies, among other data.

If we add the values declared as a transport service and the so-called “related services”, we arrive at the value of:

If we check and cross this information with the same year of 2019, from the BACEN Balance of Payments, we will notice that:

There are still no statistics available on the value of income paid and declared for International Freight at DIRF under the revenue code “9412 – International Freight”, but judging by the huge number of companies that were not even aware of the obligation to declare Freight International at DIRF, it is estimated that, in a simple crossing of data, it will be possible to verify that 9 out of 10 importers and exporters do not comply with this obligation. In other words, less than 10% of companies comply with this obligation!

See below the comparison and evolution of the discrepancy of the numbers declared by the companies in Siscoserv of how much they paid for freight (generally still within Brazil) and how much is actually sent abroad through exchange contracts:

Why 9 out of 10 companies do not declare International Shipping on DIRF?

Know the 5 misinterpretations that lead companies and accountants not to declare International Freight at DIRF: 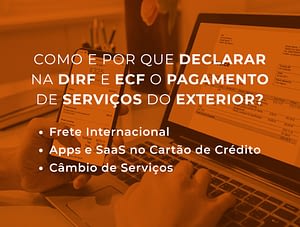 In this course, the impact of Provisional Measure 1040/2021 is addressed, which talks about changing the Siscoserv law, which provides for:
? SHARING EXCHANGE DATA
? SHARING DATA OF OTHER ANCILLARY OBLIGATIONS

If your company prefers to have a LIVE personalized training, please contact our experts clicking here, and understand how your entire team can have exclusive training, where they can ask specific questions about your case.

Course ?? Disabled Siscoserv and Shared Data: How and why declare foreign service transactions in DIRF and ECF?

What does the Federal Revenue say about Declaring International Freight in DIRF?

In addition to MAFON (Withholding Income Tax Manual) to be specific about the obligatoriness declaration of International Freight at DIRF, the Q&A Handbook it also clarifies the main misinterpretations mentioned above.

Why does it make sense to collect in DIRF the data that were reported in SISCOSERV?

As can be seen in the image above, the data on the company benefiting from the earnings in the DIRF are exactly the same as those that were subject to registration in the Siscoserv.

The difference between the two obligations lies in the details of the operations, since Siscoserv had NBS, which allowed a more precise classification and identification of the service being transacted.

For example, International Freight in DIRF has a single revenue code to be informed, in NBS there was details about the modal, such as air, sea, road and also about the type of cargo or packaging.

In practice, what was stated by the Ministry of Economy that there will be no harm to the production of “statistics and inspection” is partially true in the case of statistics, which can indeed be produced, but not with such precision and assertiveness, with regard to statistics. to inspection is true 100%.

There really will be no harm to the Ministry of Economy, especially the Federal Revenue, when it comes to collection and this has two reasons:

These other obligations are more mature in terms of sanctions and penalties. There were cases of companies that paid the tax, made the withholding, but delayed the declaration of what was paid. That is, even having paid the tax, if there is a delay in the declaration, this can generate penalties and the company can be fined in 2% or up to 20% of the tax amount per month.

How to avoid these risks?

For operations and services PREVIOUS:

For operations in the service CURRENT:

We also have the option to generate automatically and free of charge for customers: DIFR, ECF, DCTF (for international payments)

Click here and chat with our team via WhatsApp

And how to solve? Know the values and number of cases to report

This monitoring is possible through the tool created by WTM do Brasil, the WTM Extract, where you can monitor all the records made in your CNPJ at Siscomex and automatically feed the generation of the International Freight declaration in the DIRF with each new transaction.

Click here and chat with our team on WhatsApp about WTM Extract.

See also what changes in DIRF and other obligations with the termination of Siscoserv.

It will be a pleasure to help! Thank you for reading this post so far and let us know!

This post about the new Siscoserv law originally written by Chiara Tracey Bolzon, based in this video and was revised and supplemented by Lisandro Trindade Viera.

Tech talent is sucked from abroad

Singapore – The Tech Valley of Asia

WTM International members are participating on the AEB board

Enter your details and start your company's take-off with WTM International.